Jesse Freeman ’15: An Update from Oxford

One of the things I’ve missed most about the US and about Williams especially is the involvement that undergraduates have with the broader math community. Giving a senior colloquium, doing original research, or presenting at a conference are all essentially unheard of at the undergraduate level in the UK. For that reason, I decided to organize a conference at which both Williams and Exeter college students could present mathematics.

The event was a huge success. Thanks to a generous contribution from the John and Louise Finnerty fund, we were able to purchase food, coffee, and bus tickets for conference participants. About half of the WEPO students attended. This included every math major in the WEPO program, but even more Williams students majoring in other disciplines! Four Oxford students attended, including a few very enthusiastic first year maths students and a second year physicist. Everyone who attended stayed for at least 4 of the 5 talks. These talks were given by

I would like to extend a special thank you to John and Louise Finnerty, Professor Katie Kent, Exeter College Rector Frances Cairncross, Exeter College Sub-Rector Jeri Johnson, Professor Steven Miller, and the Williams math department for their invaluable support in organizing this event.

Here are some pictures from the event, the Exeter College Quarrel Room, refreshments, and the presentations: 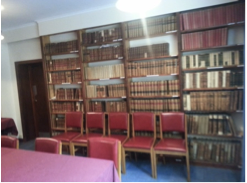 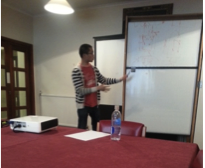 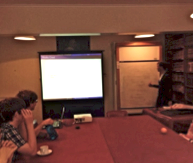 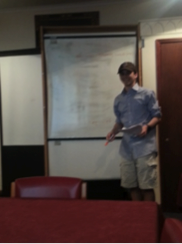