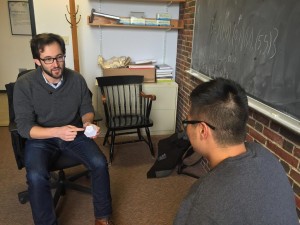 Goldmakher tells Ai about the importance of creativity and ownership in mathematics.

When I was in 7th grade, in Boston, I enrolled in an experimental program called The Math Circle, where students discover math on their own. We, the students, came up with all sorts of ideas about number theory, argued with each other, proposed conjectures, shot each other down, and eventually came up with all sorts of proofs. No one told us these things–we made them up. Turns out other people had discovered them earlier, but that wasn’t the point. The point was that we owned them–they were ours because we invented them! This experience showed me that math was creative and could be created by me. From then on, I was totally hooked.

Do you take this kind of curiosity into your teaching at Williams College?