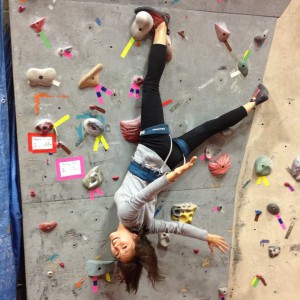 I took a lot of math courses growing up. There was a positive feedback loop in the classes that I have taken. Taking math courses that I enjoyed made me love math even more. I became more confident in my ability to do higher level mathematics.

Can you tell me your math career prior to Williams?

When I lived in San Diego, I took an algebra course during middle school. When I moved to Irvine, however, there were no advanced-level courses for me to take. So I traveled by bus to another school where such courses were offered. I moved once again to Korea and went to an international school. There I took an online course on statistics. I was always interested in taking what seemed to be challenging courses for middle school and high school students.

What was the moment when you decided to major in math?

I took a fair amount of math courses during my freshman and sophomore year, so it was natural to pick the major. I like the math department here at Williams. They are friendly and supportive and are the reason why I continued to take more math courses.

What is the interaction between math students and professors?

Students can go to the library and see that professors are in their offices waiting for them to come in. The offices are very close to the library so you can’t miss them on your way. There is a strong sense of community building among the students and faculty.

What was your most difficult math class?

Abstract Algebra. This class was difficult because some ideas were hard to understand. The class demanded a lot of work and I spent many hours understanding new concepts. Two class meetings were spent on a single chapter. I was used to having more time dealing with one chapter, so it was naturally harder. It didn’t seem like there were topics or classes I took that would build up to that class. This class introduced me to intense proof writing that I have not taken before.

What was your favorite class?

Multivariable Calculus was my favorite class. I could grasp the terms better because the class was building up on concepts that I remember. I was able to visualize the terms. The class allowed me to be artistic. I could draw multiple graphs in a plane and color code them.

What do you do outside of math?

I really enjoy rock climbing. It connects me to math because rock climbing deals with problem solving. At first, going up is not so challenging. You can pick any colored rock that you would use to go up. Given the multiple rocks above you at any given moment, it is not a difficult task to make it to the top. When you get enough practice, you can decide to rock climb using rocks of a single color. This is a more difficult, yet fun challenge. The problem solving in rock climbing is figuring out how to bend your body in a way to keep climbing forward. I always look forward to a new path to take. The possibilities are endless.

Any advice for students?

For potential math majors, I would say, like doing proofs. If you are not enjoying coming up with a proof, then you will not like math. For current math students, working with others is crucial. By collaborating with others, you are helping each other out. New ideas can come out and challenging math problems become easier to do. Just make sure to do the math by yourself afterwards. This is helpful when preparing for an exam. A final thing I would say is don’t be afraid to branch out from mathematics. There are many applications of math. Just go out there and try new things.