The Fundamental Theorem of Arithmetic states that the ring of integers is a unique factorization domain, that is, every integer can be uniquely factored into a product of primes. In other rings, there are analogues of prime numbers, but factorization into primes is not necessarily unique!

In order to determine whether factorization into primes is unique in the ring of integers of a number field or function field, it is useful to study the associated class group – the group of equivalence classes of ideals. The class group is trivial if and only if the ring is a unique factorization domain. Although the study of class groups dates back to Gauss and played a key role in the history of Fermat’s Last Theorem, many basic questions remain open. This summer, we will investigate some of these questions in both the number field and function field realms.

At least one course in abstract algebra is required.

Sampling from a multivariate probability distribution is not simple.    More often than not, people construct Markov chains to sample from such distributions, but are ultimately unsatisfied with the resulting sample.     This is because the sample is not “exact,” or “perfect.”     In this group, we will look at some commonly used distributions and (hopefully) arrive at efficient ways to produce an exact sample from these distributions.     Algorithms that we will most likely resort to include the accept-reject algorithm, the adaptive accept-reject algorithm, and perfect sampling.

For background on these sampling methods, please look at Chapters 2 and 13 of “Monte Carlo Statistical Methods” (2004) by Christian P. Robert and George Casella.

Project Description: Of course it’s easy to approximate an irrational real number by a rational:  the rationals are dense in R.  However, if we introduce arithmetic considerations and measure the closeness of the approximation as a function of the size of the denominator of the rational in question, then the issue quickly becomes more subtle, nuanced, and mysterious.  Diophantine approximation is the area of number theory that has this fundamental question as its starting point.  Through a suite of beautiful ideas, including the theory of continued fractions and best approximants, we have the means to study the best rational approximations to irrational numbers.  However these approximants possess a tremendous amount of rich arithmetic structure that remains yet undiscovered.  Here we will investigate a number of different but connected questions involving the delicate structure of these objects and how–by discovering new decomposition and asymptotic results–they will lead to further insights into our understanding of the notion of ‘number’.

Note: This particular group will start on June 7 and end on August 6 (one week earlier than the announced dates) and will include a weekend trip to Newport, RI (June 11-12) to attend and speak at the Spring Meeting of the Northeastern Section of the Mathematical Association of America.

The following references are selected results from previous undergraduate research in diophantine analysis.

(1) Perelman’s stunning proof of the million-dollar Poincaré Conjecture needed to consider not just manifolds but “manifolds with density” (like the density in physics you integrate to compute mass). Yet much of the basic geometry of such spaces remains unexplored. This will be our first research topic. See references [1-5] below.

We will investigate the distribution of the eigenvalues for various classes of random and deterministic operators: Schrodinger operators, Jacobi matrices and their unitary analog, the CMV matrices. The spectral analysis of these operators provides a better understanding of the behavior and properties of metals, semiconductors, and insulators.

We will study both the statistical distribution of eigenvalues regarded as point processes and the distribution of the spacings between eigenvalues (the level statistics). We will use methods from functional analysis, probability and from the theory of orthogonal polynomials.

Project Description: We will explore many of the interplays between number theory and probability, with projects drawn from L-functions, Random Matrix Theory, Additive Number Theory (such as the 3x+1 Problem and More Sum Than Difference sets) and Benford’s law. A common theme in many of these systems is either a probabilistic model or heuristic. For example, Random Matrix Theory was developed to study the energy levels of heavy nuclei. While it is hard to analyze the behavior of a specific configuration, often it is easy to calculate an average over all configurations, and then appeal to a Central Limit Theorem type result to say that a generic system’s behavior is close to this average. These techniques have been applied to many problems, ranging from the behavior of L-functions to the structure of networks to city transportation. For more on the connection between number theory and random matrix theory, see the survey article by Firk-Miller.

Project Description: The mathematical theory of knots is one of the most fascinating areas in mathematics today. In addition to involving deep mathematics, it also has a variety of applications, including to DNA knotting and synthetic chemistry. We will be particularly interested in the aspects of knot theory that pertain to how a knot sits in space. This includes the differential geometry of knots, the stick number of knots and various so-called superinvariants of knots, which are related to these questions. We will pursue a variety of questions related to these invariants. Previous work on which we will build appears in the reference list below. (Starred authors were undergraduates at the time of the work.)

D. Greilsheimer*, A. Woo*, Journal of Knot Theory and its Ramifications, Vol. 6, No.2

[3]An Introduction to the Supercrossing Index of Knots and the Crossing Map, C. Adams,

Another summer of fantastic math is already upon us! Check out the Facebook page here. 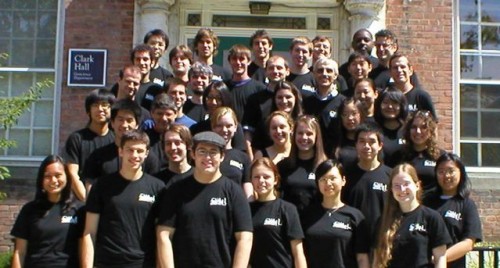 The members of SMALL ’10 shows off their new t-shirts!

The great challenges of 2010

SMALL is yet to lose a challenge this year, and hopes to continue that record in the coming days! Be it frisbee or volleyball, karaoke, or paper airplane contests, they are up to the task! Pictures from these various events coming soon.